"I am extremely pleased with our reserve growth during 2014. We increased total proved reserves 305% year-over-year and these outstanding results speak to the quality of the assets we have in our portfolio. With our existing acreage position in the core of the Utica Shale, Gulfport is well positioned to continue to achieve strong reserve growth for years to come," said Michael G. Moore, Chief Executive Officer and President.

In accordance with Securities and Exchange Commission ("SEC") guidelines ("SEC Case"), at year-end 2014, reserve calculations were based on the average first day of the month price for the prior 12 months. The prices utilized for Gulfport's year-end 2014 reserve report were $94.99 per barrel of oil and $4.35 per MMBtu of natural gas, in each case as adjusted by lease for transportation fees and regional price differentials. Utilizing these prices, the present value of Gulfport's total proved reserves discounted at 10% (referred to as "PV-10") was $1.8 billion at December 31, 2014. The PV-10 value of our total proved and probable reserves was $2.4 billion at December 31, 2014. PV-10 is a non-GAAP measure because it excludes income tax effects. Management believes that the presentation of the non-GAAP financial measure of PV-10 provides useful information to investors because it is widely used by professional analysts and sophisticated investors in evaluating oil and gas companies. PV-10 is not a measure of financial or operating performance under GAAP. PV-10 should not be considered as an alternative to the standardized measure as defined under GAAP. We have included a reconciliation of PV-10 of proved reserves to the most directly comparable GAAP measure-standardized measure of discounted future net cash flows. With respect to the pre-tax PV-10 amounts for probable reserves, there does not exist any directly comparable GAAP measure, and such amount does not purport to present the fair value of Gulfport's probable reserves.

The following table reconciles the standardized measure of future net cash flows to the PV-10 value of Gulfport's proved reserves:

Gulfport Energy Corporation is an Oklahoma City-based independent oil and natural gas exploration and production company with its principal producing properties located in the Utica Shale of Eastern Ohio and along the Louisiana Gulf Coast. In addition, Gulfport holds a sizeable acreage position in the Alberta Oil Sands in Canada through its 25% interest in Grizzly Oil Sands ULC.

This press release includes "forward-looking statements" within the meaning of Section 27A of the Securities Act of 1933, as amended (the "Securities Act"), and Section 21E of the Securities Exchange Act of 1934, as amended (the "Exchange Act"). All statements, other than statements of historical facts, included in this press release that address activities, events or developments that Gulfport expects or anticipates will or may occur in the future, future capital expenditures (including the amount and nature thereof), business strategy and measures to implement strategy, competitive strength, goals, expansion and growth of Gulfport's business and operations, plans, market conditions, references to future success, reference to intentions as to future matters and other such matters are forward-looking statements. These statements are based on certain assumptions and analyses made by Gulfport in light of its experience and its perception of historical trends, current conditions and expected future developments as well as other factors it believes are appropriate in the circumstances. However, whether actual results and developments will conform with Gulfport's expectations and predictions is subject to a number of risks and uncertainties, general economic, market, credit or business conditions; the opportunities (or lack thereof) that may be presented to and pursued by Gulfport; competitive actions by other oil and gas companies; changes in laws or regulations; and other factors, many of which are beyond the control of Gulfport. Information concerning these and other factors can be found in the Company's filings with the SEC, including its Forms 10-K, 10-Q and 8-K. Consequently, all of the forward-looking statements made in this news release are qualified by these cautionary statements and there can be no assurances that the actual results or developments anticipated by Gulfport will be realized, or even if realized, that they will have the expected consequences to or effects on Gulfport, its business or operations. Gulfport has no intention, and disclaims any obligation, to update or revise any forward-looking statements, whether as a result of new information, future results or otherwise. 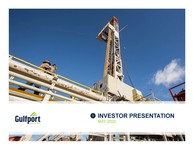