OKLAHOMA CITY, April 30, 2020 (GLOBE NEWSWIRE) -- Gulfport Energy Corporation (NASDAQ: GPOR) (“Gulfport”), today announced that its Board of Directors (the “Board”) has unanimously adopted a tax benefits preservation plan (the “Tax Benefits Preservation Plan”) to protect the ability of Gulfport to use its tax net operating losses (“NOLs”) under Section 382 of the Internal Revenue Code (the “Code”) to reduce its future tax liabilities.

As of December 31, 2019, Gulfport had approximately $1.3 billion of federal NOLs available to offset its future taxable income. Gulfport’s ability to use these NOLs would be substantially limited if Gulfport experienced an “ownership change” within the meaning of Section 382 of the Code. Generally, an “ownership change” occurs if the percentage of the Company’s stock owned by one or more of its “five-percent shareholders” (as such term is defined in Section 382 of the Code) increases by more than 50 percentage points over a three-year period.  In light of the recent high volatility and trading volumes in the Company’s stock in the midst of the current market disruptions, Gulfport determined to adopt the Tax Benefits Preservation Plan to prevent an inadvertent impairment of its NOLs. The Tax Benefits Preservation Plan is similar to plans adopted by other companies with significant NOLs.

The Tax Benefits Preservation Plan will expire on the close of business on April 29, 2021.

Pursuant to the Tax Benefits Preservation Plan, Gulfport will issue, by means of a dividend, one preferred share purchase right for each outstanding share of Gulfport common stock to shareholders of record on the close of business on May 15, 2020. Initially, these rights will not be exercisable and will trade with, and be represented by, the shares of Gulfport common stock.

Under the Tax Benefits Preservation Plan, the rights generally become exercisable only if a person or group (an “acquiring person”) acquires beneficial ownership of 4.9% or more of the outstanding shares of Gulfport common stock in a transaction not approved by the Board. In that situation, each holder of a right (other than the acquiring person, whose rights) will be entitled to purchase, at the then-current exercise price, additional shares of Gulfport common stock at a 50% discount.   Alternatively, the Board, at its option, may exchange each right (other than rights held by the acquiring person) in whole or in part, at an exchange ratio of one share of Gulfport common stock per outstanding right, subject to adjustment. Except as provided in the Tax Benefits Preservation Plan, the Board is entitled to redeem the rights at $0.001 per right.

If a person or group beneficially owns 4.9% or more of the outstanding shares prior to today’s announcement of the Tax Benefits Preservation Plan, then such person’s or group’s existing ownership percentage will be grandfathered.  However, grandfathered shareholders will generally not be permitted to acquire additional shares.

Additional information regarding the Tax Benefits Preservation Plan will be contained in a current report on Form 8-K to be filed by Gulfport with the U.S. Securities and Exchange Commission.

Sidley Austin LLP is acting as legal counsel to Gulfport.

Gulfport is an independent natural gas and oil company focused on the exploration and development of natural gas and oil properties in North America and is one of the largest producers of natural gas in the contiguous United States. Headquartered in Oklahoma City, Gulfport holds significant acreage positions in the Utica Shale of Eastern Ohio and the SCOOP Woodford and SCOOP Springer plays in Oklahoma. In addition, Gulfport has an approximately 22% equity interest in Mammoth Energy Services, Inc. (NASDAQ:TUSK) and has a position in the Alberta Oil Sands in Canada through its 25% interest in Grizzly Oil Sands ULC. For more information, please visit www.gulfportenergy.com.

This press release includes “forward-looking statements” for purposes of the safe harbor provisions of the Private Securities Litigation Reform Act of 1995, Section 27A of the Securities Act of 1933, as amended, and Section 21E of the Exchange Act of 1934, as amended. All statements, other than statements of historical facts, included in this press release that address activities, events or developments that Gulfport expects or anticipates will or may occur in the future are forward-looking statements, including, without limitation, statements regarding Gulfport’s ability to utilize and realize the value of its NOLs and how they could be substantially limited if Gulfport experienced an “ownership change” as defined in Section 382 of the Code, whether the Tax Benefits Preservation Plan will reduce the likelihood of such an unintended ownership change from occurring, the potential impact of the utilization of the NOLs on Gulfport’s free cash generation and the potential impact of distribution of the rights on Gulfport’s financial conditions and results of operations. These statements are based on certain assumptions and analyses made by Gulfport in light of its experience and its perception of historical trends, current conditions and expected future developments as well as other factors it believes are appropriate in the circumstances. However, whether actual results and developments will conform with Gulfport’s expectations and predictions is subject to a number of risks and uncertainties, many of which are beyond the control of Gulfport, that could cause actual results to differ materially from the results discussed in the forward-looking statements, including, without limitation, federal and state tax legislation and unreported buying and selling activity by Gulfport shareholders. Information concerning these and other factors can be found in Gulfport’s filings with the U.S. Securities and Exchange Commission, including its Forms 10-K, 10-Q and 8-K. Consequently, all of the forward-looking statements made in this press release are qualified by these cautionary statements and there can be no assurances that the actual results or developments anticipated by Gulfport will be realized, or even if realized, that they will have the expected consequences to or effects on Gulfport, its business or operations. Gulfport has no intention, and disclaims any obligation, to update or revise any forward-looking statements, whether as a result of new information, future results or otherwise. 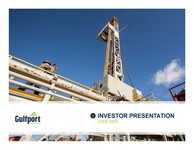