Grizzly Oil Sands ULC ("Grizzly"), a company in which Gulfport holds an approximate 25% interest, recently announced that Alberta's Energy Resources Conservation Board (ERCB) and Ministry of Environment have completed their review of Grizzly's Algar Lake Project and have prepared their approval documents. A request has been made to the Government of Alberta to provide an Order-in Council authorizing the ERCB to issue the approval to Grizzly. This is a significant milestone for Grizzly and it is expected that the final approval will be received in sufficient time such that field construction will commence as planned at freeze-up, generally late November or early December. Long lead equipment ordered earlier this year is being received and module fabrication of the central plant has commenced. Completion of the entire project is expected by the end of 2012 with first bitumen production in 2013.

In connection with Gulfport's Fall 2011 redetermination, Gulfport's lead lender has provided a commitment letter increasing its borrowing base from $90 million to $125 million, subject to the approval of the other banks within the syndicate.

Gulfport recently acquired approximately 600 additional acres in the Permian Basin, increasing its total leasehold position in the play to 15,300 net acres. Gulfport's newly acquired acreage is located in Andrews County with portions offsetting its existing acreage in the county.

Gulfport Energy Corporation is an Oklahoma City-based independent oil and natural gas exploration and production company with its principal producing properties located along the Louisiana Gulf Coast and in the Permian Basin in West Texas. Gulfport has also acquired acreage positions in the Niobrara Formation of Western Colorado and the Utica Shale of Eastern Ohio. In addition, Gulfport holds a sizeable acreage position in the Alberta Oil Sands in Canada through its interest in Grizzly Oil Sands ULC.

This press release includes "forward-looking statements" within the meaning of Section 27A of the Securities Act of 1933, as amended (the "Securities Act"), and Section 21E of the Securities Exchange Act of 1934, as amended (the "Exchange Act"). All statements, other than statements of historical facts, included in this press release that address activities, events or developments that Gulfport or Grizzly expect or anticipate will or may occur in the future, including such things as future capital expenditures (including the amount and nature thereof), business strategy and measures to implement strategy, competitive strength, goals, expansion and growth of Gulfport's or Grizzly's business and operations, plans, market conditions, references to future success, reference to intentions as to future matters and other such matters are forward-looking statements. These statements are based on certain assumptions and analyses made by Gulfport and Grizzly in light of their experience and perception of historical trends, current conditions and expected future developments as well as other factors they believe are appropriate in the circumstances. However, whether actual results and developments will conform with Gulfport's and Grizzly's expectations and predictions is subject to a number of risks and uncertainties, general economic, market, credit or business conditions; the opportunities (or lack thereof) that may be presented to and pursued by Gulfport or Grizzly; competitive actions by other oil and gas companies; changes in laws or regulations; and other factors, many of which are beyond the control of Gulfport or Grizzly. Information concerning these and other factors can be found in the Company's filings with the Securities and Exchange Commission, including its Forms 10-K, 10-Q and 8-K. Consequently, all of the forward-looking statements made in this press release are qualified by these cautionary statements and there can be no assurances that the actual results or developments anticipated by Gulfport and Grizzly will be realized, or even if realized, that they will have the expected consequences to or effects on Gulfport, its business or operations. Gulfport has no intention, and disclaims any obligation, to update or revise any forward-looking statements, whether as a result of new information, future results or otherwise. 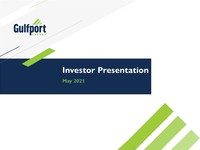